Florida is known the world over as a tropical destination; the peninsula has all the trappings of an island paradise, with its year round sunshine, white beaches, ocean side dining and sport fishing. Discussing the state evokes visions of relaxed retirees, weathered fisherman and droves of sunburnt tourists. This idyllic image of Florida as a vacation destination is thanks in part to the advent of cinema or the moving picture.

Since the early 1900’s Florida’s tropical look has doubled as exotic far away jungles, the Pacific Ocean, and the Fareast. Florida has hosted a variety of classic films, from iconic horror film “Creature from the Black Lagoon” to the star studded “Key Largo”. The moving picture of film and television through its quick rise to popularity helped to define and promote Florida‘s tropical paradise image. Anyways, heres a little bit of Florida Film History.

Once called Hollywood south, Florida’s relationship with filmmaking began in 1908 with the budding subsidiary of Thomas Edison’s General Film Company Kelem studios. Edison’s outfit set up temporary shop in Jacksonville, where they immediately began work on their first Florida filmed production “A Florida Feud: Or Love in the everglades.” Which was well received by the critiques and the public alike, the silent film was said to be an accurate portrayal of rural life in Florida at the time. Kelem went on to produce 18 films between their arrival in 1908 to their return to NY in March 1909. These films would be the seeds for America’s love affair with the sunshine state and helped make it the tourist destination it is today. 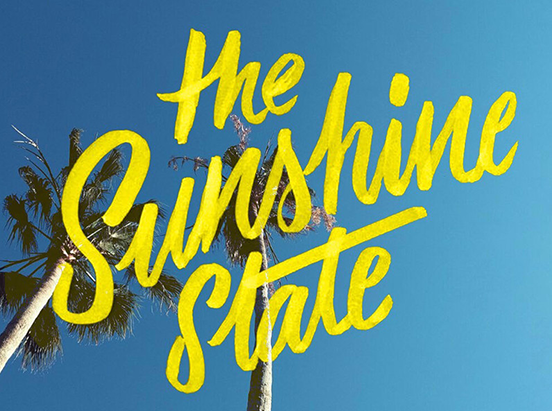 By the fall of 1914 the Federal Reserve Bank opened for its first day of business, and on Wall Street bond trading was reinstated. Meanwhile in Florida, dozens of production companies had sprung up in Jacksonville, names such as Field features and First National Pictures, and others had sister offices or studios in the city. By 1916 there were countless films being shot in Florida, one of the more popular titles is “Strangled harmony”, produced by Vim comedy company between 1915 and 1917. It starred Oliver Hardy of the famous comic duo Laurel and Hardy.

With the influx of the wild Hollywood types, and their bohemian lifestyles, Jacksonville’s primarily religious conservative locals developed a disdain for the “movie people”. Numerous misunderstandings with locals arose as a result of filming fictional versions of bank robberies, gunfights, kidnappings and the like. In turn, man studios returned to New York or headed to LA. Yet Hollywood and America’s crush on Florida’s quintessential, tropical look and sunlight lingered on. And on an early morning in 1919 the legendary D.W. Griffith arrived in Florida for the filming of the first scenes for his thriller “The Greatest Question”, produced by award winning First National pictures.

In spring of 1921 amazed Americans heard first sports radio broadcast, while the Fox Company shot its film “Miami Beach, Florida“ starring silent film star Thera Bara. Back in Jacksonville Norman studios was in production for the western Film “The Bull-Dogger”, starring famed black actor Bill Pickett who was discovered by Norman studios head Richard Norman, while Pickett was working as a rancher in Oklahoma.

The Florida film industry was in its growing stages, and with the recent invention and popularity of accompanied sound to moving pictures in 1927, came an army of filmmakers to Florida to utilize it. From the immensely popular & profitable Tarzan franchise “Tarzan finds a son!” (1938) to “Tarzans secret treasure” (1941) both of which were filmed during the summer in Wakulla springs Florida, After a slight lull during WW2, in the late 40’s Florida production picked back up again and in 1948 the ground breaking “Key Largo” was released. Which was shot mostly on location in the quaint Florida Keys and starred Humphrey Bogart, Lauren Bacall and Clair Trevor. Trevor was later nominated for and won an academy award for best actress in a supporting role. The film was also nominated best-written drama for the work of Richard Brooks and Jon Huston. 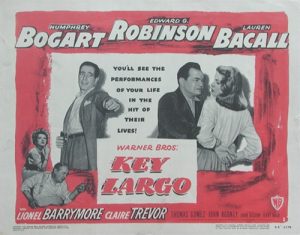 Post war 40’s-50’s brought a boom for Florida film production. Titles like “The Barefoot Mailman”(1951), shot in Silver springs and “The Greatest Show on Earth”, which was based loosely on the life and times of Circus tycoon Joe Barnum. The biopic was directed by the celebrated Cecil B. DeMille and filmed in Sarasota, starring the talented Jimmy Stewart.

Florida’s waters often doubled as the South Seas and its jungle-esque interior and swamplands, were often cast as the jungles of Africa, South America or the Far East. One of my personal favorite examples of this was the 3D sequel to the creature from the black lagoon “The Revenge of the creature” shot in 1954 in Silver Springs Florida and was another huge hit for Universal Studios. MGM also came to Silver springs to use Florida’s tropical look in “Jupiter’s Darling”, an MGM film directed by George Sidney and starring the beautiful Esther Williams and leading man Howard Keel, and was based upon Robert Sherwood’s play. 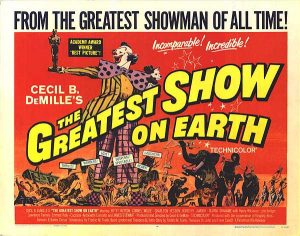 Now an established filming location, Florida began to not only host films but also syndicated TV shows, like the hit aquatic action adventure series “Sea Hunt”. Which starred Lloyd Bridges, award winning leading man, and father of actors Jeff and Beau Bridges. In the unrelenting winter of 1964, while record-breaking ice storms crippled central New York, beloved comedy actor Jackie Gleason had had enough, and moved the Jackie Gleason show from New York to sunny Miami. The theater in which the show was based still stands today on Washington Avenue in Miami Beach.

While Gleason set up his theater, across town in Key Biscayne the kids show “Flipper” began production, directed by Ricou Browning who got his start with “Creature from the Black Lagoon” & also directed “Sea hunt”. Browning produced and directed numerous films & shows for Miami based Tors Studios, now known as Greenwich studios. Browning honed his skills, and in 67 he would produce and direct another Florida based show “Gentle Ben”, which was syndicated from 1967 to 1969.

During the 60’s Florida was home to a plethora of cinema, one screen gem shot in Miami was “The Lady In cement” starring a young Frank Sinatra, as Tony Rome a gruff gumshoe detective investigating a woman’s mysterious death. The Florida weather even attracted the in vogue kids show of the time “Lassie”, who’s crew produced a couple episodes in Florida in 1965. 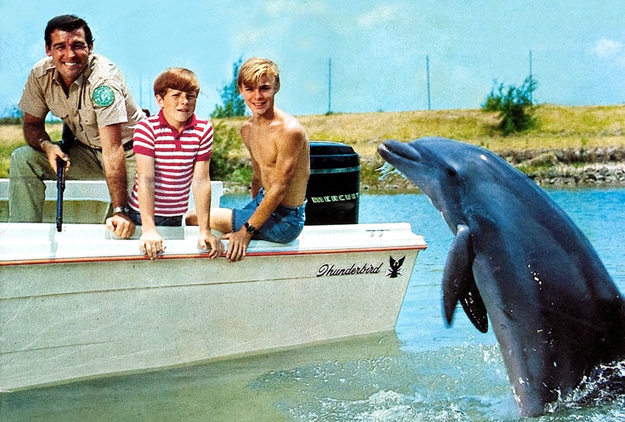 Over the following years so much was filmed in Florida it would impossible to mention all of the titles in one article. I will mention a few of the more remarkable and watched films and shows of the 70’s and 80’s. Considered by some to be one of the worst horror films of all time, “Frogs” began production in Sarasota in 1972 and starred Sam Elliot and the beautiful Joan Van ark. The cheesy action thriller “Airport 77” shot its gritty underwater sequences of a downed plane In Wakulla springs in 76. The sequel to cinema classic “Jaws”, “Jaws 2” a Universal pictures production was directed not by Spielberg but by Jeannot Szwarc, and was set to the backdrop of Navarre Beach and Okaloosa Island in the long hot summer of 1977.

With the 1980’s and 90’s came numerous popular films and hit shows many shot specifically in Miami. Miami was home to “Que Pasa USA?” a locally loved, watched and later nationally syndicated Spanglish sitcom. About a Cuban Family trying to navigate American life in Miami.

I have to mention, the now notorious “Scarface” starring Al pachino as the street savvy Tony Montana & Michel Phiffer as his drug addled trophy wife. Also produced in the 80’s was the huge hit show Miami Vice starring Don Johnson and Phillip Michael Thomas as the flashy poised vice detectives Crockett and Tubs. Elsewhere in 1980’s Florida the franchises “Police academy 5” and “revenge of nerds2” filmed. With the onset of the 1990’s more productions came to Florida, blockbuster hits like “Cocoon”, “Bad boys”, and “Ace Ventura”, all filmed in Miami.

With in the last ten years the narrative series “Magic City”, “The Glades”, “Burn notice”, and hit reality show “Jersey Shore” all took up residence in Miami Beach. With even more recent big budget films like “Spring breakers” “Magic mike”, “War dogs”, which also used Miami’s sleek look as a backdrop for their stories. Currently in Florida, tax incentives or not, The state and specifically Miami with its sexy and tropical appeal, is a go to location for high fashion shoots, music videos, syndicated shows, and films. Miami is currently host to HBO’s “Ballers” starring Dwayne the Rock Johnson, while in the keys “Bloodline” is being produced by Netflix. At Miami’s permit office, hundreds of applications for photo shoots and music videos pouring in since the beginning of the 2017.

I would be doing an injustice to the city if I didn’t mention Miami’s local film scene and its local talents like documentarian Billy Corben of “Cocaine cowboys” fame who bases most of his documentaries in Florida, or recent academy award winner for best film Barry Jenkins, who filmed his academy award winning masterpiece “Moonlight” in Miami. The magic city also plays host to a variety of Festivals and film events like the Miami international film fest, Film gate with their film festival and interactive series, or the now notorious Secret Celluloid Society, who host rowdy late night screenings for their eclectic 35mm retro film showcase. 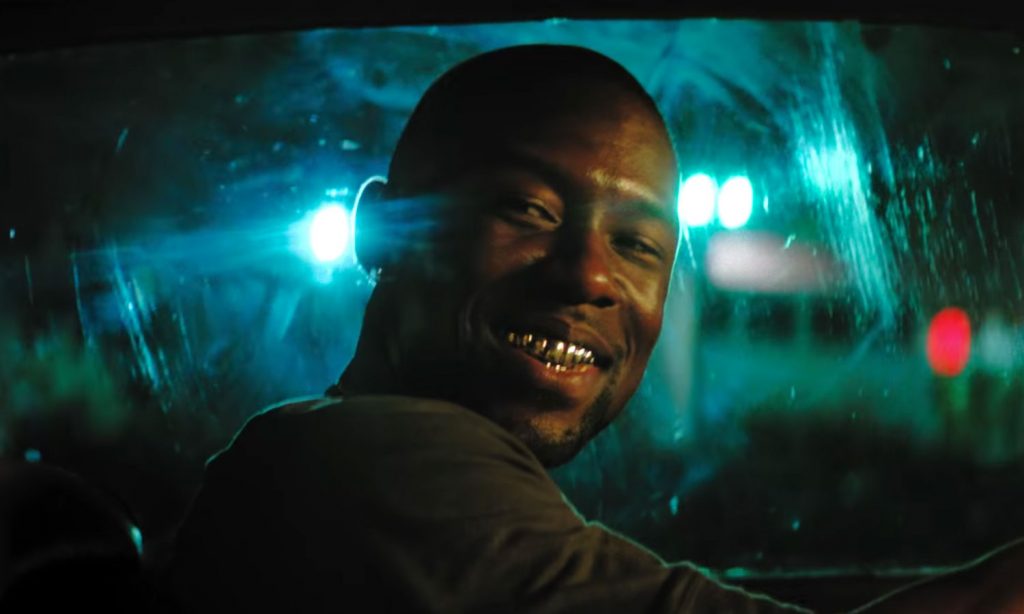 Now that you know some Florida film history, if you need beautiful beaches, pristine ocean waters and a tropical look, Florida has a location for you. Even if you aren’t a filmmaker, Florida and specifically Miami is a prime destination for fun, sun and nightlife. Come on down to Florida and visit, and if you are coming down to film something drop us a line at Chroma House and check out Filmflorida.org

—**Chroma House is a Miami video production company in all aspects of digital content creation and film production.** 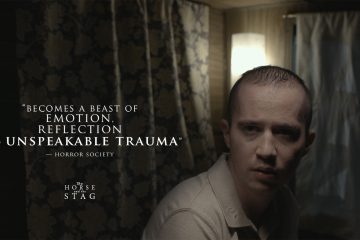 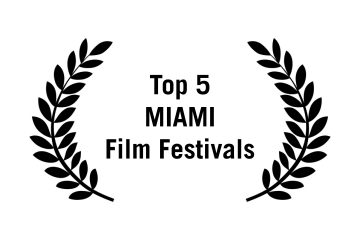 The top 5 Miami film festivals By Tomas Nixon Have you spent the last few months making an amazing south Florida film and are seeking a venue or festival to screen your work? Well, look Read more… 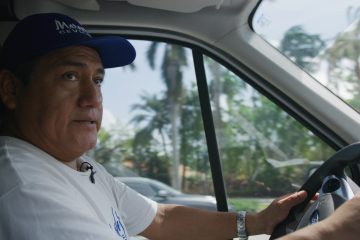 Marcelo’s Ceviches – How we did it

Marcelo’s Ceviches About a month ago, Chroma House, a Miami Video Production Company, had the opportunity to document local Miami ceviche legend Marcelo Florindes of Marcelo’s Ceviches. During our time with him, not only did Read more…